PEDAL IN THE PARK

Pedal MCR opens in The Boathouse in Platt Fields Park, Fallowfield on Saturday 9th July for Pedal In The Park- a jam packed day of bicycling activities and workshops for all ages and abilities including wheel building workshop, bicycle treasure hunts, roller racing, bicycle powered music and much more.

Experiments at the Library

Versuche, an exhibition of new work and research by artist Amy Feneck, takes place at the Working Class Movement Library from 13 to 16 July 2011.

The title of the show refers to the German word for ‘tests, tries, trials, efforts, attempts & experiments’ and is also the title of a journal edited by political playwright and theorist Bertolt Brecht in which he published drafts of his scripts and poetry.

This presentation of new work and work in progress, alongside a selection of objects, photographs and books from the Library’s collection, is shown here in this spirit of ‘Versuche’.

Amy has been visiting the Library since January this year and is fascinated not only by the content of the Library itself but also its day to day running, the history of its collections and the physical environment in which it is housed. She is interested in how the Library provides an important context in which to investigate and discuss the current political climate.

As a continuation of her research process, Amy is keen for this exhibition to be seen as an extension of her studio and the reading room, creating a space in which links between her work and material from the Library can be made, and creating starting points for discussion.

On Wednesday 13 July at 2pm Amy Feneck will give a short talk about her work and an introduction to the exhibition. The exhibition is then open Wednesday 13th 2pm to 5pm, Thursday 14th and Friday 15th 10am to 5pm, and Saturday 16th 10am to 2pm. Admission is free.

An event to mark the 75th anniversary of volunteers going to support the Spanish Republic 1936-1939. This will be in the sculpture hall where there is a memorial  to the volunteers from Greater Manchester who served both as soldiers and nurses during the war.

A walk to  sites in and around Albert Square connected with the trade union and labour movement. This  will last 1 hour approximately and will be lead by Michael Herbert (Red Flag Walks). 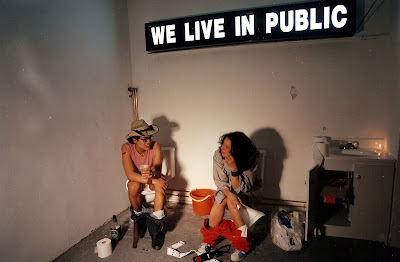 We Live in Public is the story of the internets revolutionary impact on human interaction as told through the eyes of internet pioneer and visionary, Josh Harris.

Though once considered the godfather of the downtown Internet scene in NYC in the 90s, known far and wide for his outrageous parties, innovations in chat, streaming audio and the creation of the first online television network, Harris is but a footnote in history at this point all because he took his experiments with the Internet and media consumption too far.

Director Ondi Timoner focuses on the legendary, million-dollar millennium party ‘Quiet’, an experiment in voluntary submission to mass surveillance. The party, which took place at an abandoned loft-manufacturing building on lower Broadway, featured over 90 Japanese-hotel-style pods where artists lived, played, worked, and celebrated.

This was followed by Harris’s submission of his own life, and new relationship to constant surveillance, whose disturbing results are like a pre-history of our current Web 2.0/Reality TV era.

Tune in to next week’s show (14th July) to find out more and visit: http://cakeliberationfront.com