Dunstan Bruce, ex-frontman with chart topping band Chumbawamba will be talking about his new 1-hour play Am I Invisible Yet? currently on tour at venues across the country. 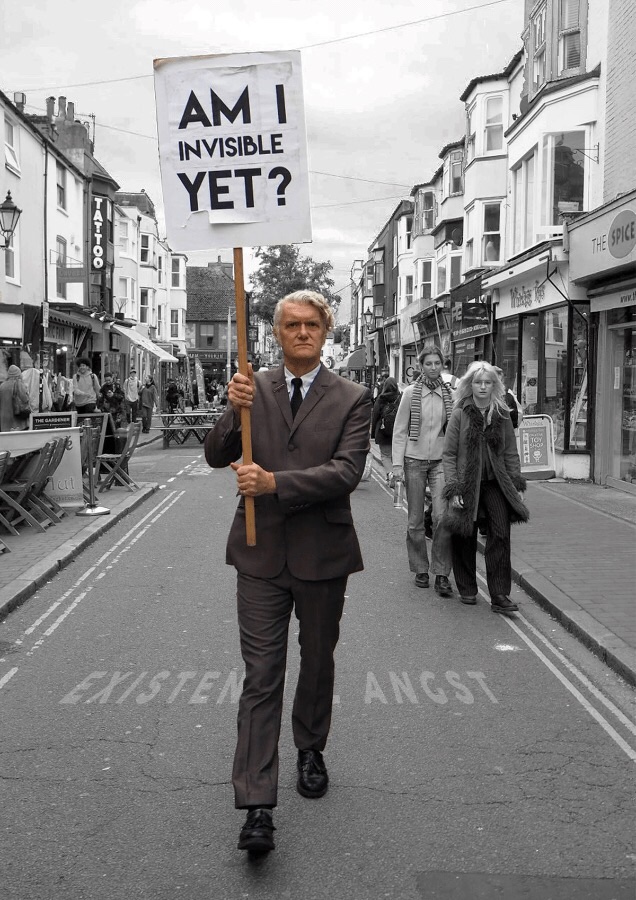 We catch up with Dunstan ahead of his 9th June show at Hebden Bridge Trades Club. Boff has just had Louder! Faster! published, a book about “how a punk rocker from Yorkshire became British Champion Fell Runner”. It’s a great read and you can pick up a copy here: https://www.gnbooks.co.uk/product/faster-louder/

No doubt talking trains and stuff and if Cubesville is to be believed covering the whole of Pink Floyd’s Dark Side of the Moon!

Listen Live:
Every other Thursday from 9.00pm-11.00pm (though during lockdown and remote recording this might just be a one hour show) on ALL FM 96.9 across south, central and east Manchester and if you are unlucky enough to live outside the area you can tune in online at: http://www.allfm.org

Listen Again:
You can Listen Again (or online for the first time) by clicking on the Playlists Menu (above) and selecting a year, then a show.
If a show has been uploaded to Mixcloud you can play it from there!
Alternatively you can jump straight to our Mixcloud page here: https://www.mixcloud.com/Underthepavement/ Welcome to “Under the Pavement”, Manchester’s radical/ alternative radio show broadcast every other Thursday from 9.00pm until 11.00pm on ALL FM 96.9, a community radio station for south, central and east Manchester, England.

“Under the Pavement” is presented by a team of three vegananarchists: David, Cubesville occasional guest presenter Veg and has been broadcasting for over twelve years! The show brings you regular guests and interviews, what’s on guide and reports on direct action and grass roots resistance in the Manchester area. The music is an alternative/ leftfield eclectic playlist covering punk, folk, experimental, indie, hip hop, electronica and pop. Tune in every other Thursday from 9.00pm until 11.00pm on ALL FM 96.9 across south, central and east Manchester and online at www.allfm.org. What people say about the show… “I love the show. Funny and interesting and informative. What could be better for a radio show? Oh, alright. You haven’t actually hung Radio One’s Chris Moyles from the hastily-constructed Under The Pavement gallows yet. But as soon as you do, you’ll become the most important radio show in the world, ever. Here, let me help…” Boff Whalley, Chumbawamba

“In July, I was lucky enough to be invited onto the wonderful Under The Pavement radio show. They’d most recently featured the song Johnny No-Following from the Protest Folk Singer CD in June (and they also played it again on the show after my appearance in July too!) and so to go along and play some live songs and have a chat on air was just too good a chance to miss. The bi-weekly show is on the ALL FM 96.9 radio station based in Levenshulme, Manchester. It’s a diverse mixture of radical music and politics, goes out live every other Thursday from 11pm-1am on 96.9FM in the Manchester area (as well as being streamed live on the internet at www.allfm.org) and presented by the really friendly Spike and David. It was going to be a long day but a very enjoyable one as I awoke at my usual 5.40am in order to get to my day job. After work, I collected my guitar before driving to the radio station and 54 miles and 2 hours later, I was parked up and exploring the Manchester suburb of Levenshulme. Fortified by chips and salad from one of the many takeaways, I went to the ALLFM studio and was able to sit and listen to the show broadcast before Under The Pavement. It was a show called Blood Under The Tracks and featured some great folk, blues and alternative country music courtesy of the presenters Graham and Graeme. They were nice guys and played some nice tunes and I would recommend you give them a listen if you are able. David and Spike arrived and we had a quick chat about the show before going ‘on-air’ regarding its format and running order etc. David put together a more structured list of how the programme would flow with myself being a guest throughout the first hour of the programme. I would be playing three songs, chatting about my music and answering a few questions as well as being able to choose some songs by other artists that I would like to be played on the show too! The three live songs I chose to play (See You In Hell, Celebrity Bus Crash, Tony Says Good Luck) were newer songs not yet recorded but the downside of that is that they are still works in progress and are likely to change with each performance as I still try to find a perfect tune or tempo with them. It was great to play the songs anyway despite it not being the best versions of them. The interview was really relaxed and enjoyable to do (though my mind went a little blank at times resulting in some of the most basic factual errors regarding dates and places etc which I only realised when listening back to a recording of the show) and it was a real pleasure to pick some songs to play also. I chose William Francis by Chumbawamba, Revolution by Dick Gaughan, Tingalpa by Eastfield and Rosa’s Happy Song by Tracey Curtis. Add to these the presenters’ choices such as David Rovics and The Smiths amongst others and it made for a really varied show. I drove home after my appearance, falling into bed at 2.30am, exhausted but happy. Let’s get the joke out of the way here and now: I’ve got a great face for radio! I admit that, but I certainly don’t have much in the way of experience or technique but David and Spike were really welcoming, really encouraging and couldn’t have made the experience any easier or enjoyable if they’d tried. I can’t thank them enough for letting me take part in the show. It’s fantastic what they’re doing, providing a voice for artists, musicians and anyone with something to say. They’re providing an alternative to the main stream radio output and above all, they’re providing inspiration, support and pleasure to anyone listening to the show. I hope they keep up the good work, keep broadcasting and keep the music alive… and do tune into the show if you can following the website link to ALLFM above or via my website links page… oh, and thanks for the badges too David!”Chris Butler

“Thanks for playing one of my tracks on your show. I enjoy your show. It’s now a regular listen for us because you make us laugh and play some good tunes!” Electro Existence

“Thanks so much for your great work and great show. It is UNIQUE!”Bob Pyle

“Finally; have a listen to our favourite internet radio station Under The Pavement, broadcasting out of Manchester. Details from www.underthepavement.org” The Four Dogs Music Team

“I’ve just been played on AllFM, 96.9FM on ‘Under The Pavement’ – the excellent radical radio show (and yes, I thought it was excellent even before they played my track!)” Al Baker

“A few of us at mvvg (Manchester Vegetarian and Vegan Group) are fans of yours and badge-wearers, and we’d love to promote our favourite radio station with these fab badges! The design is brilliant – they really stand out. If you decide to post some I’ll dish them out to members. Good luck – what you do is wonderful and you deserve the widest support possible. Best wishes, Cathy Bryant (mvvg/MVS/VON)

“Then, in the dying embers of International Women’s Day, I was on UnderThePavement, at ALL FM in Manchester – how laid back is that show?! Thanks David and Spike for having me on to sing a couple of tunes amid the anarchic-punk tracks – songs about the politics of the oppressed come in all different shapes and sizes, I reckon! You’ll not find a show quite like this one – check it out on 96.9FM every other Thursday”. Claire Mooney

“Under the Pavement has been a bi-weekly two-hour show on Levenshulme-based ALL fm for around four years and is set to gain its own daytime weekly slot when that station renews its schedules. Billing itself as “anarchy on the airwaves”, it’s a mix of radical talk, reports from activist, anarchist and radical communities and news from popular collaborative news website Indymedia. The music’s a pretty eclectic mix – last week’s show included music from Le Tigre, Moby, Public Enemy and several tracks by Anti-Flag (who I have to admit to never having heard of), as well as several songs that they’ll not be able to play in daytime! The presentation is as you would expect on non-profit community radio; quite wonderfully unpolished and a refreshing change from the more established stations. My only criticism of it would be that it’s a little unintuitive to people who might not be a part of this particular “scene”; let’s see if the new slot helps that a little! That’s not to say, however, that it doesn’t have a sense of humour. Anyway, I’m a better anarchist than you”. Radiolicious Blog

“Manchester radio show with great tunes and interviews. It goes out on ALL FM 96.9”. Clearer Channel

“The entire gig tonight is dedicated to the Under the Pavement people… such a rarity in the UK, it’s more or less a one-off” Attila the Stockbroker, Brighton punk performance poet

“I can vouch for the show, it’s awesome. Not that it needs me to vouch for it.” Isa Chandra Moskowitz Author of Vegan With A Vengeance and host of The Post Punk Kitchen Cable TV Show, New York, USA

“It’s a Manchester radical programme thats on fortnightly. The presenters are shit but they’re doing us all a lot of good” Knock Out Apathy Blog, south Manchester

“Listened to the most recent podcast today and loved it.” Robert McMinn, The Sagebrush Variety Show, Radio Boise, Boise USA

“I’ve been listening to this show for months now and love it! What in the US would almost certainly be a hardcore punk show actually mixes a lot of interesting genres together and has great guests to boot. Love it love it!” Drew Texas, USA