Guantanamera is a 1995 comedy from Cuba, directed by Alea and Tabío. When Aunt Yoyita dies during a visit to Gina in Guantánamo, Gina must take the body to Havana. Gina’s overbearing husband Adolfo, a punctilious undertaker with political ambitions, takes charge of the journey. 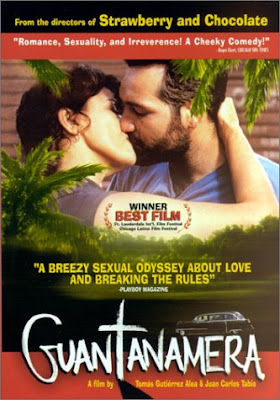 On the road, they keep crossing paths with Mariano, a playboy trucker with a woman at every way station. He and Gina recognise each other from their student days. Before they reach Havana, Gina realises she can choose between Adolfo and Mariano.

Film starts at 7.45 and will be followed by discussions on Cuba, politics and film.
Entry to film £3 or £2 for unwaged, low waged, students or OAPs.

Upstairs at the King’s Arms, Salford