10.45am: A Walk Around Manchester’s Radical, Riotous and Rebellious History
Robert Owen Statue, outside  the Co-operative Bank, Corporation Street: £6/ £3

We will explore Manchester radical, riotous and rebellious  history including the Co-operative Movement, the Clarion newspaper,  Karl  Marx and Friedrich  Engels, the Siege of Manchester,  Peterloo, Chartism and   rioting in Albert Square and  discover what happened  when   the town  was invaded   by a Scottish army.

The walk will last 2 hours and will  be led by Michael Herbert.

Michael has been researching , writing and talking about Manchester’s radical history for thirty years. He has an MA in the history of the Manchester Region and  is a  Trustee of the Working Class Movement Library in Salford.  His publications include The Wearing of the Green, a  history of the Irish in Manchester,All proceeds from this walk will go to Oldham Unity which supports  many refugees and asylum seekers in Oldham. 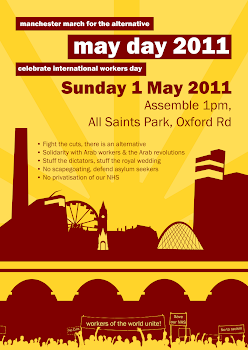 6.00 pm: Media, Community and Social Movements: The Zapatistas and the other campaign
The event takes place at Duke’s Cinema in Lancaster and consists of

– a screening of filmmaker Nicolas Défossé’s most recent documentary ¡Viva Mexico! and a Q&A session with the director after the film

– a round-table debate on ‘Media, Community and Social Movements’, including Défossé, López,Oscar Forerofrom Lancaster University, the writer and broadcaster Bob Dickinson, David of Under the Pavement Radio Show on ALL FM 96.9 Manchester, and a representative of Diversity FM Lancaster.

Before the film, Cornelia Graebner from LU will give a short introduction to’Media activism and grassroots mobilization: The Zapatistas’.

The event is organized by the Latin America Research Cluster (LARC) at Lancaster University in collaboration with the Duke’s Cinema. TheSocietyof Latin American Studies (SLAS) has partially funded the event.

The Verge at The Cheshire Ring, Hyde £7

If you have an event you would like us to mention on Under the Pavement emailradio@underthepavement.org or write to:
Under the Pavement Radio Show,
c/o ALL FM 96.9,
19 Albert Road,
Levenshulme,
Manchester,
England,
M19 2EQ